“There’s Nothing Common About Sense” 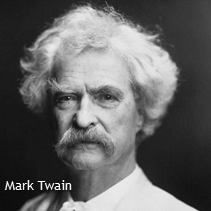 The title above is a quote attributed to Mark Twain.

And life now a days is just as befuddling as it was in his time. Media and experts pour out spin that can overwhelm our native intelligence.

Sometimes things are as simple as they appear. And that’s encouraging when wrestling over a complex decision or planning something.

Here are several examples of what appears to be lapses in common sense.

“For years, Starbucks was known for aggressive growth, opening some stores only a few city blocks away from others.”

Too many stores too close together? You’ve seen it. One Starbucks within frappucino distance of another. Starbucks fell to their own propaganda.

My father purchased a Chrysler dealership after years of being a very successful salesman. He’s in his new dealership for six months when gas prices rise above levels anyone can imagine.

Now, all of a sudden big cars and trucks aren’t selling. Gas is too expensive. And Chrysler doesn’t have enough high-mileage cars to sell. Chrysler hamstrung dealers because they didn’t see it coming and aren’t prepared. As a result, my father gets rid of the dealership.

Two more thoughts while I’m at it

“All other things being equal, the simplest solution is the best.”
Occam’s razor

“If you can’t explain something to a 5-year old so they understand it, you don’t understand it yourself”
…paraphrased from Kurt Vonnegut

Where else do you see common sense hiding?

“There’s Nothing Common About Sense”2008-07-022016-02-04http://www.revenue-iq.com/wp-content/uploads/rev-iq_logo_web.pngRevenue-IQhttp://www.revenue-iq.com/wp-content/uploads/Sales_Writing.png200px200px
About
Chris Arlen
I consult with facility service contractors across North America who want to improve that "last mile" of sales success. We collaborate to create winning solutions; I bring outside expertise and best-practices, they bring specific customer insights and organizational knowledge.