Is US Airways shooting itself in the head? 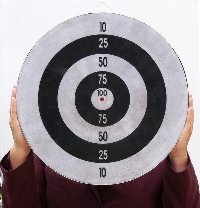 That’s right, in the head, not the foot. Because the foot might take some time. And US Airways appears in a hurry to end it all.

US Airways Targets its Noggin

In the past US Airways, like other airlines, eliminated free in-flight snacks and food, and began charging for them. Instant new revenue source. Their resourcefulness is understandable in the long suffering airline industry.

Now, US Airways has eliminated it’s in-flight beverage service. This means passengers no longer get soda, coffee, or water without paying for it. That’s right, no water unless you pay.

I learned this on a trip from Seattle to Philadelphia to hold a training session. Imagine a 4-1/2 hour flight, no pay, no H2O.

Clear Cutting the Forest for the Trees

US Airways’ zeal for cutting costs has blinded it to the experience customers have in their planes. It’s cannibalizing what little is left of its customer experience. And at some point that’s fatal.

This strategy appears to have reached a tipping point, one where US Airways may be driving passengers away, rather than drawing them in.

Why? Because people talk.

I Told You So

Here’s an example, it’s mine. During breaks in my Philadelphia training session I told at least 4 clients how shocked I was about no-pay, no-water on US Airways.

One of those clients told me his US Airways’ water story. He asked an attendant for a drink of water and was told “that’d be $2 please”. He thought she misunderstood him and said “no, I don’t want a bottle of water, just a drink, you know, in a cup”. The attendant hesitated for a moment, then sheepishly said “the $2 isn’t for a bottle, it’s for a cup of water”.

He looked at her with his jaw on the floor then said it was outrageous.

She agreed, said she felt really bad about having to charge passengers for water, that she no longer enjoys her job, doesn’t feel like going to work because of it – she also said she wasn’t alone, it was a common feeling among other flight attendants.

On my return flight I saw proof of what she was saying. One of my flight attendants wore a button that said “I Just Work Here”.

I asked her what it meant, and she said she couldn’t answer that question. She just wore the button. I took that to be mean US Airways wasn’t allowing her to speak out against the airline, but union regulations allowed her to wear buttons.

What does that button say about US Airways?

What does that say about how their employees feel?

And what does that tell you about the US Airways’ customer experience you’re going to receive.

And I’d guess that several of the clients I told my water story to are already passing it on to their clients and friends.

What’s Next? Paying to Use Restrooms In-Flight?

Don’t laugh, it could happen, soon.

I’d guess US Airways’ number crunchers have already worked out how to charge for restrooms. They’re called pay toilets and are another revenue source. When that happens, we’re all ____ out of luck if we don’t have the cash in flight.

I’m not belittling the situation US Airways is in, they’re struggling to remain afloat. But the savings they’re generating aren’t showing up in widely lower pricing than their competition. They’re not saturating the market with pricing so low that all their flights are filled every time.

Think about it. How low of a fare would it take for you to fly on a plane with a pay toilet?

If other airlines follow, does a free toilet and cup of water become distinct competitive advantages between airlines?

For myself, I’m not going to fly US Airways. I’ll have my clients book another airline for me.

Funny, I’m the one thing that can help US Airways survive in trying times, I’m a customer.

Oh yeah, and I’m going to tell these water stories to friends and clients too. Matter of fact, I just did that.

And I only hope pets transported in the cargo holds of  US Airways’ craft carry the exact change. So helpful to flight attendants, and another contribution to US Airways’ bottom line.

How are survival cost cuttings affecting your customer experience?

Is US Airways shooting itself in the head?2009-02-062015-02-05http://www.revenue-iq.com/wp-content/uploads/rev-iq_logo_web.pngRevenue-IQhttp://www.revenue-iq.com/wp-content/uploads/rev-iq_logo_web.png200px200px
About
Chris Arlen
I consult with facility service contractors across North America who want to improve that "last mile" of sales success. We collaborate to create winning solutions; I bring outside expertise and best-practices, they bring specific customer insights and organizational knowledge.