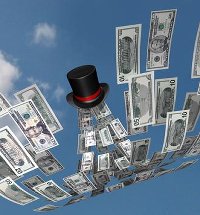 Long away and far ago the cleaning contract for Ubetcha Corporation was coming to the end of its term.

The contract was for millions of square feet and millions of dollars. It was much lusted after by janitorial contractors.

The Procurement Manager for Ubetcha pre-qualified five cleaning contractors, including the incumbent. A Request for Proposal (RFP) with cleaning specifications was sent to all.

All contractors returned proposals and pricing.

One contractor, NowUseeit2, was particularly aggressive with their pricing. Their numbers stood out, stood below, far, far below the others.

During the presentations Ubetcha challenged NowUseeit2 to explain how they could deliver at their pricing.

NowUseeit2 boasted of high-productivity, world-class training, and hiring practices second to none. And of course, their people were their greatest asset.

NowUseeit2 summarized by saying “Don’t worry, we’re professionals. We’ll take care of you and your end-users. And we’ll do it all within our pricing”. Ubetcha couldn’t argue because NowUseeit2 had been pre-qualified.

As you can guess, Ubetcha inked the deal quickly and announced their new cleaning provider to the other bidders.

They all wondered how NowUseeit2 could possibly deliver to specifications at that unearthly low price.

The Procurement Manager saw a steroid pumped bonus ahead at year’s end.

The Facility Manager was just as excited. He’d hold the contractor’s feet, throat and internal organs to the fire for the promotion opportunities he was sure to receive.

NowUseeit2 began service, working through the start up period.

Into the second quarter the Facility Manager noticed a few out of the way stairwells weren’t particularly clean. Surely the specifications covered that. But there didn’t seem to be complaints from any of his end-users.

Why worry? On the whole NowUseeit2 was responsive to him and his end-users.

NowUseeit2’s account manager was friendly and sunny. She was a sweetheart. She was in front of Ubetcha’s key contacts each week. That was some hand holding.

It was true thought the Facility Manager, NowUseeit2 kept everyone happy.

Why should he complain about a spec not being kept here or there. Besides, there was all that money saved.

So the Facility Manager’s expectations were reshaped. Happy end-users, a responsive contractor, and huge cost reductions. Specs were, after all, only a guideline.

At the end of that year, NowUseeit2 won Ubetcha’s Service Partner of the Year Award. More for cost savings than quality, but they won it just the same.

One Moral of the Story

Some contractors bid below market pricing – to win contracts. This strategy wins some contracts some of the time.

Some customers feel that’s OK. If their end-users are happy and costs are compressed into a shrinking budget, what’s not to like? Expectations can be brought into line with budget. And specs are, after all, only a guideline.

Is this your reality?

A Janitorial Fable2009-03-122017-05-26http://www.revenue-iq.com/wp-content/uploads/rev-iq_logo_web.pngRevenue-IQhttp://www.revenue-iq.com/wp-content/uploads/rev-iq_logo_web.png200px200px
About
Chris Arlen
I consult with facility service contractors across North America who want to improve that "last mile" of sales success. We collaborate to create winning solutions; I bring outside expertise and best-practices, they bring specific customer insights and organizational knowledge.