What’s Wrong With You? 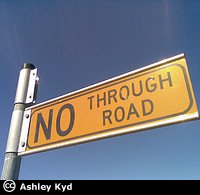 I’m recovering from the flu and as you can tell by this post’s title my crankiness hasn’t left. So here are a few gripes about business dealings as seen from the customer’s POV (point of view), that’d be mine.

And if there are business lessons here, they’re about how we should be mindful of what we say, or do to our customers. Or we’ll get a message from them saying “What’s Wrong With You?” (which I’m fully expecting after this post). Here’s what we’ll look at:

Framing the Conversation with a Sledgehammer

Watch for messages with titles that leave no doubt as to which side of an issue the publisher is on. Here are a couple of examples framing different sides of the same topic (politics).

If you watch CNN, you’ve probably seen their graphic of Broken Government as they present an issue, or in the upcoming window on screen.

By framing the conversation in the title this way it leads one to think:

I searched and couldn’t find CNN running this special programming during the Bush presidency. So, the way CNN has framed this title says they’re against Obama’s presidency (my observation).

Those assumptions put me into rebuttal mode with:

Here’s one from the liberal citizens’ movement Moveon.org. The same sledgehammer approach to framing the conversation. This time the rationale goes like this:

One can identify the same underlying assumptions, and my rebuttals that go to this messaging. It’s just trying to get the audience to do something different than CNN’s messaging.

When framing the conversation is done heavy-handedly, it becomes manipulation. And when it’s that obvious, it raises hackles and throws objectiveness and credibility out the window (some might say it shoves the BS meter off the charts).

That’s a shame because there may be valuable information to be gained if one starts with an open mind.

A Bill by any other name, would still smell…

Comcast provides a bill online, Ecobill, and you can discontinue the paper bill. They”re greenwashing it as an ecologically responsible way to pay.

That’s really stretching the green thing. Yes, I’m not receiving paper, and that makes it green. But the company is saving millions in not printing and mailing these dinosaur bills.

A little more honesty upfront and you can still keep the self-serving catch phrase.

In Comcast’s case, if they’d included a little honesty that they were saving money, then the message would be more believable.  Ecobill could have stated they were passing those cost savings on to customers by keeping their costs down (see, didn’t even cost them anything).

Here’s a great example of developers not working with users for a better interface.

You get the idea, there’s a different instruction with different services. Not all have you do the same thing.

Here’s  the problem. Almost every service doesn’t tell you what that key to press to leave a message UNTIL the end of a long list of other options, such as review, revise, delete, priority, etc.

And leaving a message is probably the most common choice 95% of the time. So why wait to the end to tell us that? Start the instructions by telling us how to do what we want to do 95% of the time?

And while I’m at it, why don’t all the phone services get together and decide on a common key for leaving a message, or replaying, or re-recording, or appending, or deleting, or…? Create a standard messaging system protocol, make it easier on all customers.

It’s almost too obvious, but getting customer input in the development phase is crucial, even for a facility service offering. If not through focus groups, then one-on-ones with friendly customers/prospects.

Hoping to return to some form of normalcy shortly and shake the flu. Maybe this post has prodded you to consider where in your customer communications or interactions you’re getting it maddeningly wrong.

What’s Wrong With You?2010-03-102015-06-09http://www.revenue-iq.com/wp-content/uploads/rev-iq_logo_web.pngRevenue-IQhttp://www.revenue-iq.com/wp-content/uploads/rev-iq_logo_web.png200px200px
About
Chris Arlen
I consult with facility service contractors across North America who want to improve that "last mile" of sales success. We collaborate to create winning solutions; I bring outside expertise and best-practices, they bring specific customer insights and organizational knowledge.