Changing suppliers means having to deal with potential disruptions during transition, and the inconvenience of breaking in newbies.

However, there are four reasons that motivate customers to change suppliers – that compel them to action, to try something different, to risk the pain.

Unfortunately sellers lump these four reasons into one – getting the lowest price. In doing so they dig themselves into a pit of misunderstanding that loses sales and creates depressives.

Here are the four reasons customers change suppliers, they’re listed in order of their power to motivate customers – and should be the motivation for sellers as well. 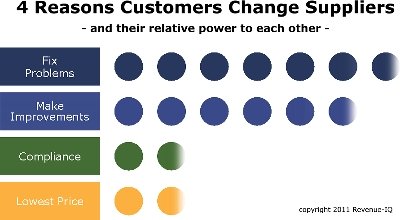 #1 To Solve a Problem

“To solve a service problem that hurts their business”.

This is the most compelling reason customers change suppliers, a burning platform that drives action.

Ask customers why they changed suppliers and you’ll likely find 9 out of 10 times it was some variation of “to solve a service problem that hurt my business”.

And contract services can hurt customers’ businesses in many ways, such as:

Seek the business impact connected to a customer’s service problem – before the bid opportunity, before the “cone of silence” descends and customers don’t share this information.

Don’t settle for uncovering only the service problem.

Solving a service problem alone, without connecting it to the business impact, is not as compelling a justification. It also fails to address other decision makers’ agendas. Speaking to business impacts expands the conversation.

#2 To Make an Improvement

Not all customers are unhappy with their current supplier. Happy customers may want to improve things. What can’t be improved?

This is the second most powerful reason for customers to change suppliers. Human nature drives us away from pain before we move to pleasure, which is why fixing the pain is first, and making a gain is second.

When implementing improvements, whether ISO certification or higher visibility to end-users, customers will overcome their fear and make a supplier change. But only if a seller shows how they’ll help the customer implement that improvement.

Seek the improvements customers want and then back into how you’d bring them about. Your soultion is presented in your proposal, but requires you to uncover this before the bid goes out.

Again, connect the business impact (this time the upside) with the improvement. It’s always more compelling (and speaks to more buyer agendas) than selling the service improvement by itself.

#3 To Comply with Regulations

Customers rarely change suppliers due to a perceived need for regulatory compliance. They may put the contract out to bid because of SOX-like compliance, but changing suppliers only because of it occurs very infrequently.

For example, an incumbent has been providing exemplary service for more than 10 years. They’ve met the customer’s cost-reduction goals every year while hitting all performance and quality metrics.

Yet when Procurement puts the contract out to bid it can be expected that a new supplier will be brought on.

The perception is that the long-tenured incumbent is too close with the customer. That the supplier holds too much sway and there must be something illegal keeping the contract that long. Of course this is almost never the case, but it’s the customer’s perception that counts.

Every bid is a chance for a sale, unless you have little to no access to the buyers and/or decision makers.

This can happen when bidding on contracts listed in online services – here customers are typically buying service as a commodity. In this case it’s better to pass on the bid opportunity.

However, reality check whether to bid or not by checking it against your sales plan. If it’s on plan, or near enough, don’t waste the chance, even if it appears to be an exercise.

Perform the same sales due diligence as listed under the SELLER’S TAKEAWAY #1 and #2 above.

#4 To Get the Lowest Price

Many sellers believe getting the lowest price is the most compelling reason for customers to change suppliers.

However, changing incumbent suppliers for the lowest price with “all things being equal” is relatively rare*.

To see why this is rare take a look at “all things being equal”. If this were true, customers would renegotiate incumbents down to match best price and scope. They’d do this to avoid the disruption of transition and having to break in new suppliers.

* Yes, in the bottom of the Great Depression there were suppliers who believed they couldn’t deliver service for what their customers needed to pay. But that”s a conversation for scope, expectations, and perceptions and is for another day.

Don’t get fooled into believing customers are often seeking the lowest price, it occurs very infrequently. Work to find customers’ problems and improvements. Then build your proposal around that.

Otherwise you’re trapped in the lowest price game, and there’s always someone willing to bid lower than you. Always.

Buyer Motivation: 4 Reasons Customers Change Suppliers2011-08-012017-07-01http://www.revenue-iq.com/wp-content/uploads/rev-iq_logo_web.pngRevenue-IQhttp://www.revenue-iq.com/wp-content/uploads/buyer-motivation-4-reasons-customers-change-suppliers.jpg200px200px
About
Chris Arlen
I consult with facility service contractors across North America who want to improve that "last mile" of sales success. We collaborate to create winning solutions; I bring outside expertise and best-practices, they bring specific customer insights and organizational knowledge.