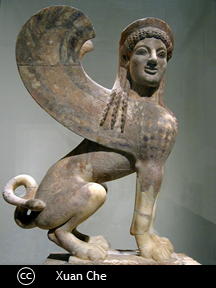 Sales prospecting is a riddle; and salespeople want one solution for it.

However, believing there’s only one answer kills off productive alternatives.

The answer to “How do I find new sales?” is like the answer to the most famous riddle in history; the riddle of the Sphinx.

The Sphinx & Her Riddle

The mythological sphinx has been around since 9,500 BC. The Greek version was a monster with the body of a lion, the wings of a great bird, and the face of a woman: not a customer I’d like to meet.

She guarded the entrance to the Greek city of Thebes, and made travelers answer her riddle if they wanted to enter the city. Bad news if they got it wrong because the Sphinx would chew them up and swallow them whole.

The riddle of the Sphinx was:

There were many wrong answers until Oedipus, another mythical Greek character, answered correctly with:

“Man—who crawls on all fours as a baby, then walks on two feet as an adult, and then walks with a cane in old age.”

The Connection between the Riddles

The answer to the sales prospecting riddle, which is the same as the Sphinx’s, is that the answer varies over time.

Prospecting methods should vary according to the salesperson’s place in their career.

That means it depends if the salesperson is:

Prospecting when Starting Out

The Starting Out phase describes a person when first joining the sales profession, or when an experienced salesperson begins selling in a new industry or territory.

Speed to early sales is critical here, yet it’s hindered by the new salesperson not knowing prospects professionally or personally, or being unknown in the market.

The appropriate prospecting methods for this phase will be inefficient but produce results with a lot of effort, which starting-out salespeople will have more of than contacts.

Prospecting with Some Traction

The Some Traction phase occurs after the salesperson has  a good number of prospects and customers in their CRM; and are also earning a glimmer of name recognition among players in their market – hopefully it’s good.

While success has bought the salesperson some time, they lack enough connections and their relationships don’t have enough clout to produce the required sales results.

Prospecting now moves towards more effective but time consuming methods. This grows the salesperson’s network, while building their reputation as a knowledgeable source.

The Fully Mature phase occurs when a salesperson’s CRM has more qualified prospects than they can reach; and their many relationships at senior levels give them access to opportunities before they’re known on the street.

Almost all opportunities now come to the salesperson with little, to no prospecting effort. However, they work harder on creating unique and compelling custom solutions.

Prospecting methods are now lead generation that maintains the reputation as a knowledge source, as well as strengthening relationships. This work helps connect with up and coming junior level prospects who will eventually become the next senior level.

The one answer to solve the prospecting riddle is that there isn’t one answer – the choice of prospecting methods depend on where you’re at in your sales career.

Use multiple prospecting methods appropriate to your situation – it’ll help you answer the Sphinx and keep your sales and career on track.

Prospecting’s Riddle2013-02-072017-07-05http://www.revenue-iq.com/wp-content/uploads/rev-iq_logo_web.pngRevenue-IQhttp://www.revenue-iq.com/wp-content/uploads/sales-riddle-of-the-sphinx.jpg200px200px
About
Chris Arlen
I consult with facility service contractors across North America who want to improve that "last mile" of sales success. We collaborate to create winning solutions; I bring outside expertise and best-practices, they bring specific customer insights and organizational knowledge.