How Competitive are You on the Win Scale?

If sales teams don’t know how competitive they are against the field, it’s just a matter of time before competitors eat their lunch.

After all, B2B customers have only so many options to choose from when they buy. They can:

• Select you
• Select  a competitor
• Insource an outsourced service & bring it back in-house
• Select a combination of you, your competitors, & insourcing
• Take no action & stick with the status quo

Since competitors figure into customers’ options, it’s obviously important to know how competitive sales teams are against them. 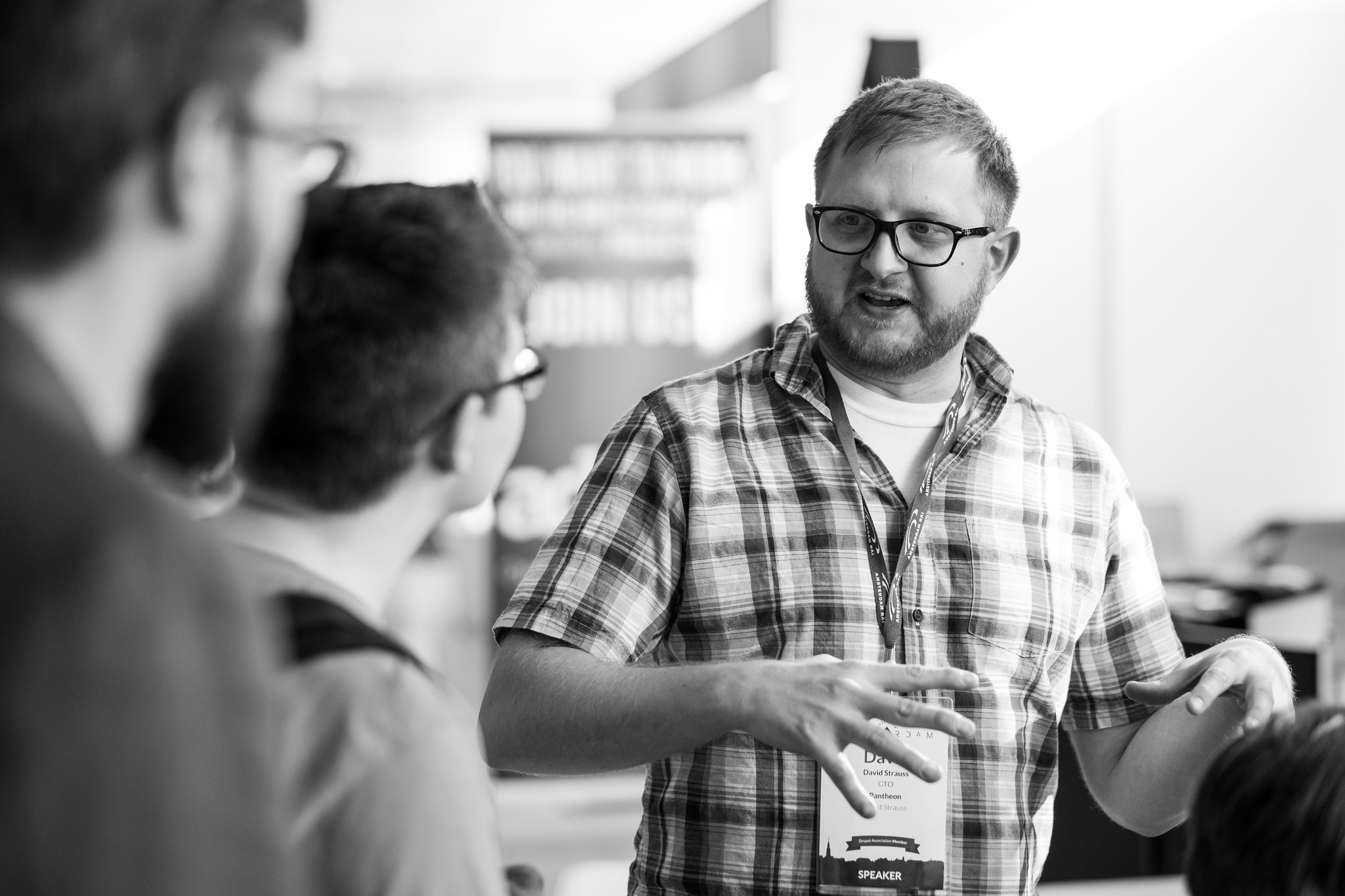 It’s even more important for sales teams to know their competitiveness because of the time it takes to turn sales around (think oil tanker) and get them moving in the right direction.

And when that happens, and it will happen, it’s easy to rationalize away the contractions. They may hear themselves saying “It’s not us, it’s customers downsizing, impacts from ACA , tightening labor markets, rising material and equipment costs, etc.”

The reality is sales competitiveness tanked first. Long before the signs from traditional metrics. 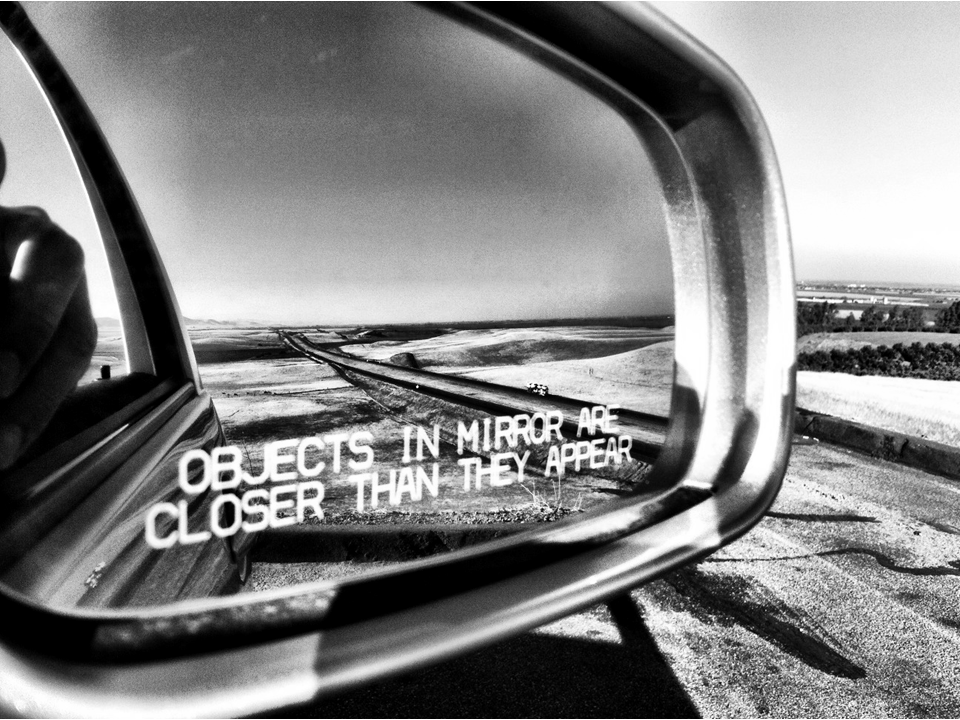 Looking at the Wrong Metrics for Competitiveness?

Many sales teams look in the rear-view mirror to see if they’re competitive, which makes  – “objects in mirror appear closer (better) than they are.”

Ask an executive if their firm is competitive and you may hear:

“Heck yeah, we’re competitive; our revenue increased year over year, we hit our sales goals, and we’re number one by market share.”

Rear-view mirror metrics, while useful for other determinations, misrepresent current competitiveness when:

When suppliers have a successful history in a specific market, their success may appear to continue endlessly into the future.

However, the truism “the only constant is change” is even truer here. The entry barriers to new competitors are never as effective as suppliers believe.

New competitors can include innovative disruptors and/or global competitors.

Innovative disruptors focus on an underserved corner of a market to gain entry, reconfiguring offerings and prices to fill mainstream wants. As the innovative disruptors start winning and move into the mainstream, the old guard competitors, who were once successful, now find themselves muscled out of the game.

Rear-view mirror metrics are slow to point out innovative disruptors’ insidious growth until it’s too late.

Global competitors, or domestic ones new to a market, are looking for growth opportunities too. And they’re looking into markets new to them but old to the incumbent market leaders. These global competitors likely have similar capabilities as the incumbents. And as it’s rarely the small global suppliers that seek to invade world markets, these new competitors have the financial size and strength to be patient with slow growth into incumbents’ markets.

Again, rear-view mirror metrics will not identify strong but slow inroads into the local market by global competitors. 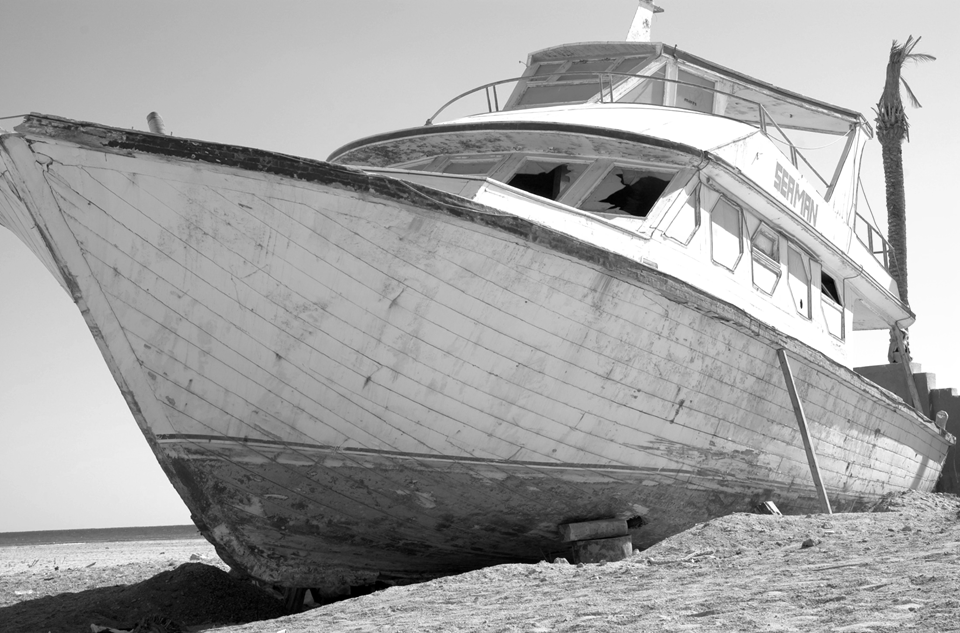 A rising tide raises all boats. And if the market is growing quickly, and possibly underserved, there’s so much demand that any and all suppliers grow.

Just by being in the “right place at the right time” rear-view mirror metrics may show suppliers as competitive when in reality they were just lucky, for a time.

And when that market cools slightly, or other suppliers move in – that’ll make things look differently and quickly show how competitive suppliers really are. 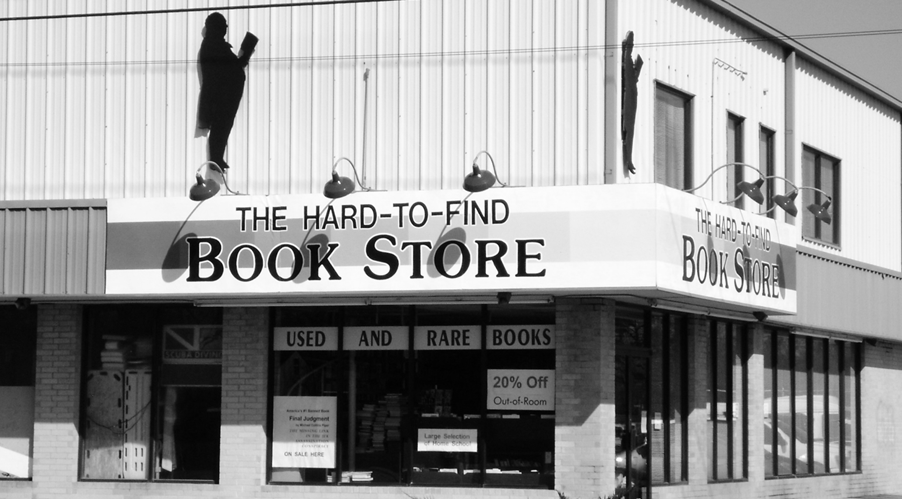 This may not happen frequently but often enough to avoid using the self-referencing metric of sales volume to goal as a determination of competitiveness.

Sometimes sales goals are like softballs; lobbed slowly underhand so they can  easily be hit out of the park by the sales team. Surprising? Nah. True? Occasionally.

No matter if the sandbagging is intentionally egregious or unintentionally minor, this rear-view mirror metric will misrepresent suppliers’ competitiveness. 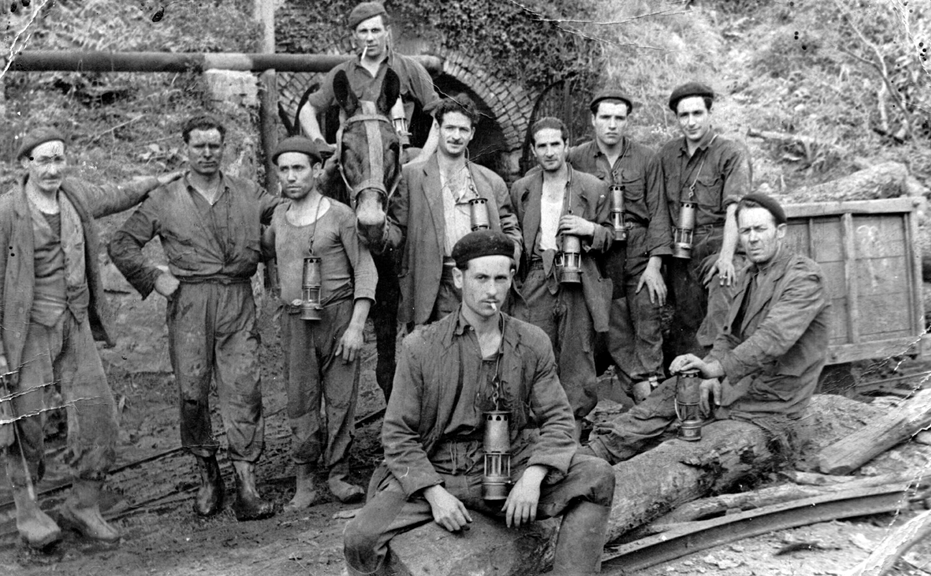 Before the Canary Kicks: Measure Competitiveness on a Win Scale

Long ago, coal miners took caged canaries into mines as an early warning against dangerous gases. If the canary died, the miners ran.

B2B sales teams need a canary to identify their competitiveness and quickly make changes before their sales die. And the best metric is:

And while market share may be an appealing candidate for the competitiveness metric, it’s too slow to reflect changes and can cloud the present due to past sales successes. 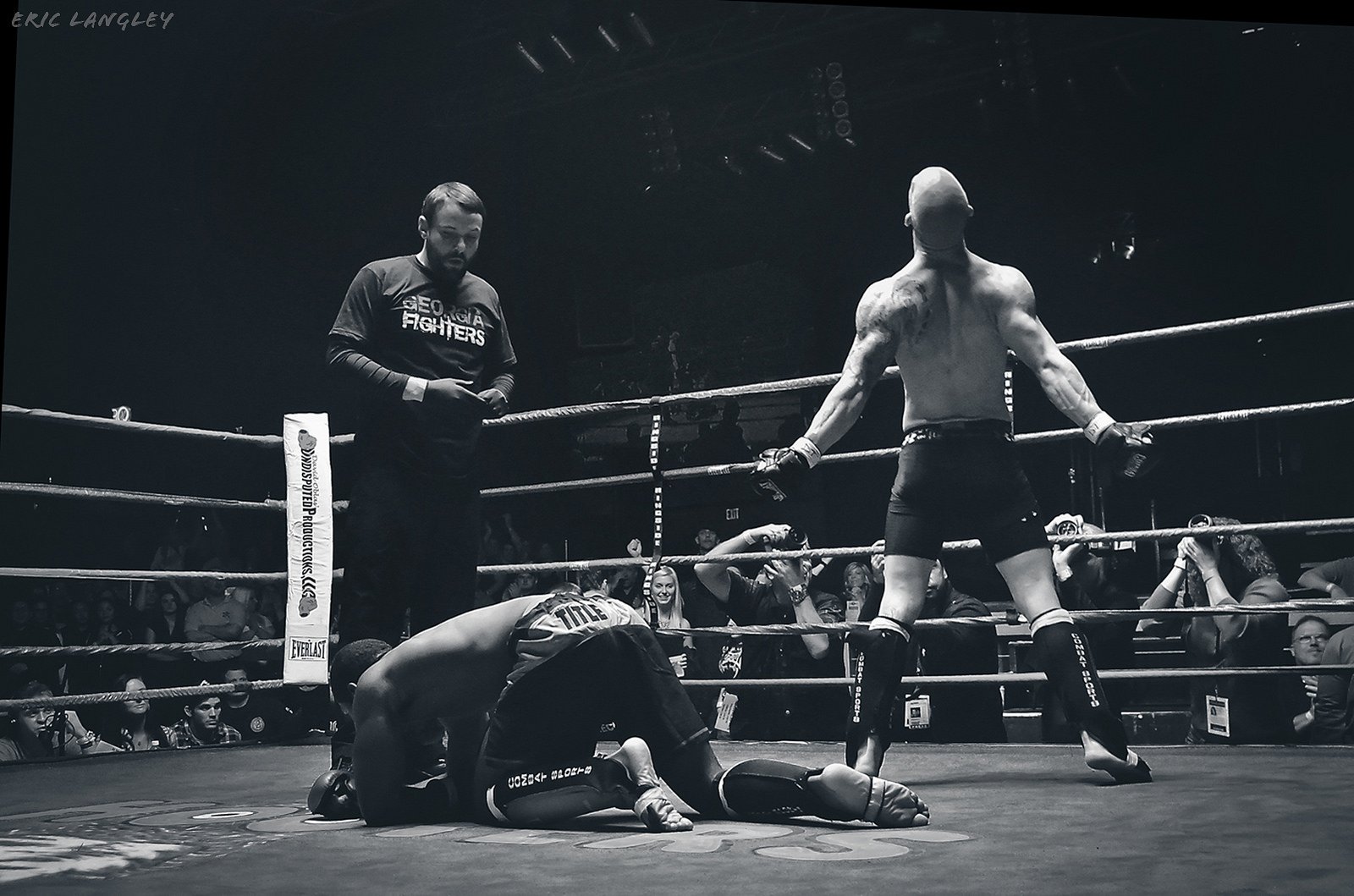 Measuring sales competitiveness is best done along a scale that uses easily available data, and that addresses the forward-outward looking usefulness and market-freshness needs. There are three (3) data values for a quick snapshot of competitiveness, which live on a Win Scale line chart.

Calculate this on a monthly basis and plot it on a line chart where the vertical scale = percentage, and the horizontal scale = months. 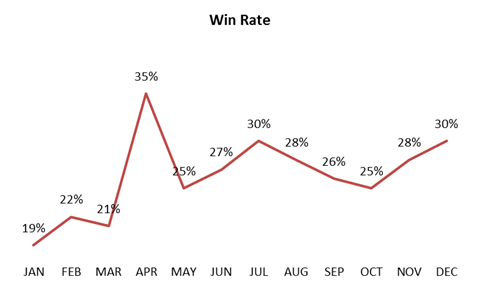 Baseline competitiveness is just that, a baseline. It’s a percentage that places your firm amidst the number of viable competitors in your marketplace: the most likely options for customers to choose. It’s an outward looking score comparing to competitors, not an inward looking level pulled from the lower limit of a run chart. 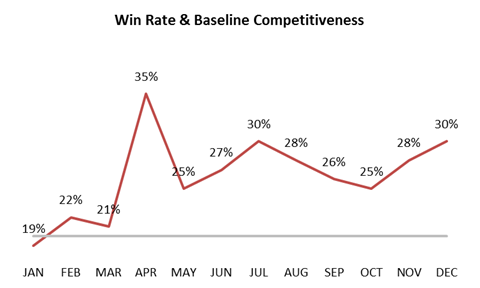 Viable competitors are the ones that routinely win in your space; not all the time but enough to make them viable customer choices.

To better understand viable competitors, imagine writing a business plan. And when you get to the part where you describe the competitors in your marketplace: These are the ones you would count.

What you wouldn’t count would be the odd duck competitors who occasionally swim in and fill up a cattle call competition. They look lost, lose, and go away. Don’t include them in the calculation of viable competitors.

In summary, Baseline Competitiveness says that if you win at the same rate as your percentage of viable competitors, you’re in essence taking turns with the competition in sharing the opportunities. That baseline is neither good nor bad – but provides a starting point for comparison against the competitive field. 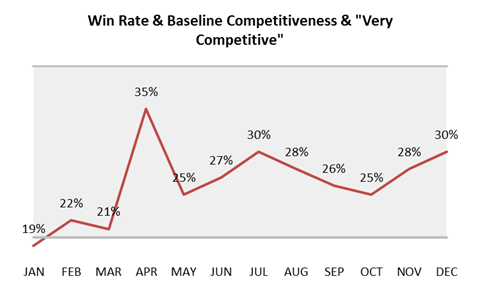 Why 20%? The 20% adder is an arbitrary percentage increase over baseline competitiveness. It was chosen through anecdotal evidence, looking at several facility service win rates. For example, increasing a 25% baseline (where you are 1 of 4 viable competitors) by another 20%, takes it to a 45% win rate, which would be considered “very competitive.”

If there are only three total competitors including yourself, a win rate of 53% would also be considered “very competitive.”

About the 20% Adder. If 20% doesn’t make sense for your market or offering, change it up or down. But keep the adder amount large enough to make the distance from your win rate to “very competitive” a significant stretch.

EXAMPLE: Putting the Win Scale Together

If you routinely compete against the same four suppliers, you would be considered “very competitive” when you win 40% or more of your sales opportunities. Your Win Scale looks like this:

Use the Win Scale to check your competitiveness monthly. Your Baseline and “Very Competitive” numbers should be fairly stable but are easy to recalculate on the fly.

Consider the Win Scale as a quick snapshot of your competitiveness. It doesn’t eliminate the need for all other sales metrics. But it does add something most of them don’t have – it’ll give you an early warning before the canary dies and those painful impacts of shrinking market share, decreasing revenues, and diminishing profits occur.

How Competitive are You on the Win Scale?2016-03-242017-06-16http://www.revenue-iq.com/wp-content/uploads/rev-iq_logo_web.pngRevenue-IQhttp://www.revenue-iq.com/wp-content/uploads/how-competitive-are-you-on-the-win-scale.jpg200px200px
About
Chris Arlen
I consult with facility service contractors across North America who want to improve that "last mile" of sales success. We collaborate to create winning solutions; I bring outside expertise and best-practices, they bring specific customer insights and organizational knowledge. 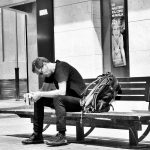 Sales Fatigue: Meltdown at the Moment of TruthSelling 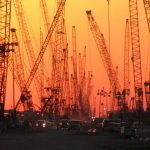 Death in the Last Mile and Final Yards of Biz DevSelling