The Lifetime Value of a Customer 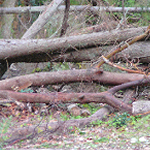 A local tree service made me think about the lifetime value of customers.

High winds and shallow-root hemlocks don’t go well together. After this winter’s storms we ended up with half a dozen 100-foot hemlocks lying around like matchsticks. Another six are tilting at crazy, dangerous angles. They needed to come down too.

There isn’t a shortage of tree services up here. Anyone with chainsaws and rented equipment are in business. Sounds like the service contracting business, doesn’t it?

So in comes John and his tree service. He was recommended by our builder. John doesn’t have a web site, or a brochure. He wears jeans and work boots. Exactly what you want from someone who’s going to cut, drag and chip tons of wood.

But John did a remarkable thing. He made a lifetime customer out of me. And I didn’t even feel it happening.

I wonder if he figured out the lifetime value (LTV) of my business. If he did, it would be the present value of all the profit he’d earn from me over a specified length of time. Would he then figure out how nice to be to me?

I don’t know if he was aware that keeping my business long-term is more profitable because he’s not spending money to get new business.

I don’t know what he thought. But here’s how I became a lifetime customer.

You Knew What He Wanted By His Attitude

From the first time we spoke, I could tell he wanted to do all our tree work. But he never came out and said it. Never.

You could just tell he wanted the work. All of it. Not just this one time. But the next, and the next. For years to come.

And these jobs don’t come up often. Only once, maybe twice a year at best. But John made it clear he wanted to be the one doing them for me.

To me, that means he didn’t see it just as a single transaction. He saw it for the long-term, as a relationship. To John, business is personal.

Honestly, what a concept! One that’s seemingly lost the bigger the spend. The more self-important we feel.

A Fair Deal for Both

One of the things he did say, and several times, was he wanted us both to get what we wanted. A fair deal for both. He made it clear he understood exactly what I wanted and reassured me I’d get it. And I believed him.

John listened to what we wanted. Spoke to me as if I have a brain (I do). Recommended what he thought should be done. Then did what I wanted.

Well isn’t that what all sellers are supposed to do? Listen to customers. But how well do we do it?

John did some extra backhoe work and didn’t bill me – nice. But it was less than an hour’s worth. So, he paid a little of his time. But it wasn’t a lot.

I don’t think this by itself made me into a lifetime customer. But how much did it contribute?

Yes, John’s a nice, personable guy. You like him the first time you meet him. But I’ve met lot’s of personable business people. And I don’t give all my business they can do to them. So why with John?

This is what John didn’t do

There wasn’t any formal selling or marketing. It was business to consumer selling. Still, there wasn’t any contrived negotiations or offerings. It was what it was.

The simplicity and straightforwardness of it made me wish more buying situations were like this. I’d happily create more long-term relationships with others if it would be like this.

How Did I Become a Lifetime Customer?

I’m still trying to figure out how John did it.

The only thing that stands out in my mind was his recognition, right from the beginning, that this was a long-term relationship. Everything he said and did was as if he knew he’d be working with me forever.

How Do You Make Lifetime Customers?

lifetime customer value
The Lifetime Value of a Customer2007-04-232015-02-05https://www.revenue-iq.com/wp-content/uploads/rev-iq_logo_web.pngRevenue-IQhttps://www.revenue-iq.com/wp-content/uploads/rev-iq_logo_web.png200px200px
About
Chris Arlen
I consult with facility service contractors across North America who want to improve that "last mile" of sales success. We collaborate to create winning solutions; I bring outside expertise and best-practices, they bring specific customer insights and organizational knowledge.