Marketing Exercise for a Parisian Restaurant 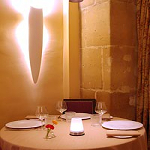 I’m exercising here, a marketing exercise for a situation and client that I won’t be working for.

Interestingly, in the exercise I’d used Word of Mouth and Web 2.0 to market a business. Your challenge, should you accept it, would be to consider how you might use these tactics to get new business for your business.

Sound like a stretch? Sure, but you’re up for it.

The restaurant is on the Ile Saint Louis in Paris. Like most high-end Parisian restaurants, it gets business the traditional way. It courts tyrannical food critics for reviews.

My wife and I were there when a food critic (she) and a wine critic (he) arrived.

It was clear these were powerful people. The owner came out, fussed over them, and then personally served them.

She, the owner, was dressed elegantly in black.

All her wait staff jumped to hand full platters and instantly whisk away empty ones. With each dish the owner spent several minutes explaining it to the critics.

Everything was going beautifully.

Until the wine critic asked about the wine.

Then it all went wrong.

The wine critic asked the owner to rate this particular wine on a scale. He moved his hands asking the owner where she felt the wine belonged on his imaginary scale.

The owner froze. She was bent at the waist, in mid pour, leaning over the table. Her brain must have vanished. The muscle’s on her face smoothed. Her expression dissolved, her body fossilized.

The owner thought this was the perfect wine for this meal, for these influential critics. What happened? It’d all gone wrong and now she was locked in rigor mortis.

She didn’t throw down the bottle and run from the room sobbing. But she wanted to, you could tell.

Finally, the owner, after what must have seemed like the Spanish Inquisition, stood upright, placed the bottle on the table, and without saying a word, dissolved into the kitchen. She wasn’t seen again that evening.

The wine critic made sneering faces to his partner, the food critic, as the owner made her silent exit.

This was cruel, fascinating, more than reality TV. It was a cheetah bringing down an antelope. We couldn’t stop watching. It was worth the price of the over priced meal.

However, it got me thinking about the owner, the pain, the personal humiliation she must have felt. And how she could break free from reviewer tyranny.

How could she find a way of attracting guests to her restaurant without having to rely on critics’ reviews?

This was the marketing exercise. Here’s what I came up with.

If It Was My Restaurant


I’d first recognize that my restaurant could survive in the large Parisian market on more than repeat diners.

Repeat diners would, at best, eat there four to five times a year. This means the large majority of our diners would be one timers, in and probably never back again. In other words, they’d be tourists. And if I’m paying rent on the Ile Saint Louis I’m getting an extremely healthy number of tourists year round.

I wouldn’t drop quality because of this insight. My goal is still to remain a four-star restaurant. But to get diners differently.

There are a large number of hotels on the Ile Saint Louis, and nearby on Ile de la Cite, and in the Latin Quarter.

Each of those hotels recommend restaurants to their guests. However, most hotel front desk staff can’t afford to eat at expensive restaurants, or never tried.

The token would entitle them to one full dinner on a traditionally slow night (Tuesday’s?). They’d have to pick up their wine but the meal would be free. Anything on the menu.

I’d want tokens used on slow nights for two reasons. First, it would make the restaurant look busy when others were empty. Potential diners walking by would see a busy restaurant and figure it was good and give it a try. Second, I wouldn’t want tokens filling my restaurant on busy nights, taking tables away from paying diners.

My wait staff and I would treat those hotel staff as if they were the most important food critics. Because they are, they have the same power. They’d recommend our restaurant over the hundreds of others in the area. Their word of mouth is powerful to tourists looking for a place to eat. We’d become their first recommendation.

I’d also seek out bloggers writing about food and restaurants in Paris. I’d invite them to try us out, and then write about the experience.

This is similar to traditional food critics. However, by adding influential bloggers to the list of intentional reviewers I’d have more chances for good reviews. And I’d increase the content on the Internet. Either way, having more critics helps reduce the power when there’s only a few.

Now I don’t know how this will help you sell more service contracts.

I do know that by exercising your marketing brain power, you’ll eventually come up with some tactic that you can use.

And, who knows, maybe it’ll get you those rave reviews you’ve been longing for.

branding web 2.0 word of mouth
Marketing Exercise for a Parisian Restaurant2007-11-212015-02-05https://www.revenue-iq.com/wp-content/uploads/rev-iq_logo_web.pngRevenue-IQhttps://www.revenue-iq.com/wp-content/uploads/rev-iq_logo_web.png200px200px
About
Chris Arlen
I consult with facility service contractors across North America who want to improve that "last mile" of sales success. We collaborate to create winning solutions; I bring outside expertise and best-practices, they bring specific customer insights and organizational knowledge.