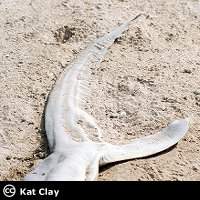 “A relationship, I think, is like a shark. You know? It has to constantly move forward or it dies. And I think what we got on our hands is a dead shark.”

Businesses, like relationships, must move forward constantly or die.

As a business, service suppliers often succumb to dead shark syndrome. Typically this occurs when they’ve reached a comfort level in annual revenue, whether that’s $5-25 million or $100-$250 million depends on executive leadership.

They become satisfied, they’re in cash cow land. Money will continue to roll in because it always has. The future will be just like the past.

Sharks in the Great Recession

But the past is no guarantee of the future. The new reality, the way things are today, will be around for several years at least.

Service suppliers who were once content to stay as they are will be chewed apart by their competitors, or die from lack of oxygen from customers. Suppliers’ reality, as a result of the great recession, is shaped by the:

Your competitors are sharks too. They must move forward or die, growing revenue year after year to appease shareholders and ownership. When they get up around $250 million that becomes tough.  For 10-14% on $250 million top line growth, that’s a $25-35 million revenue increase. Next year that means another 10-14% on $275-285 revenue.

Competitors’ only options are to buy competitors for the revenue – and sell more to more customers.

It’s not only your competitors who have changed, but your customers too.

Customers are sharks who are struggling to move forward for survival, for profits.
Their loyalty to you for your past contributions is virtually gone. They’re now forced to look at that ridiculously low bid pricing from your competitors and seriously consider it.

If that low price comes from a large competitor now poaching among your customers then watch out. Your customers may be thinking “No one ever got fired buying IBM (or ABM, or Securitas, or Johnson Controls), even if they’re not saying it.

Customers are fighting to survive profitably and if that means shaking up their buying behavior towards lower/lowest price, then so be it.

You can tell the shark has stopped moving when a supplier exhibits these signs:

Suppliers that are not actively increasing their skills and capabilities are soon to be dead sharks and are easily spotted, as seen by a:

The soon to be defunct shark is also identified when they:

However it’s decided, suppliers will need 1) a vision of where they want to go 2) a plan to get there and 3)  a commitment of resources (money, time, expertise). Most of all, it will require recognition by top executives and ownership that staying still is no longer an option.

Suppliers don’t need to do everything at once, but any going forward strategy and action is better than dead in the water.