Don’t Go Under That Bus

You know you’re under the front wheels of the contract cancellation bus when customers place you, their service supplier, in a poor light so they can come out smelling like roses.

That kind of customer-supplier relationship, and we’ve all had them, quickly makes gargantuan profits seem undersized for what you’ll endure earning them.

This post follows up “Blindsided by a Mental Model” and looks at some ways to help you avoid getting tattooed with tire treads. The following is based on reader feedback from that earlier post as well as from my years of receiving painful instruction from painful customers.

Let’s look at what you might to do to avoid all that pain:

Before You’re Thrown Under the Bus

There’s no time like the “before-service-starts” time to influence your customers’ mental model of service relationships. After all, you’re just beginning service: You don’t know them, and they don’t know you.

Here are some ideas:

Make Explicit Your Commitment in a Letter

In a comment to “Blindsided by a Mental Model”, Bill Todd wrote:

“I have learned over time that it is best to be up front about these issues early on in a customer relationship. If I have the opportunity, I like to speak frankly with the customer and then follow-up with a “commitment letter” describing what they can expect from us in terms of integrity, pricing etc. In the letter, I slip in how they can help us be successful in meeting their expectations.”

Bill’s idea of a “commitment letter” makes your commitment explicit. Using his idea, I’d suggest you keep this to a 1-page letter, highlighting the vital few areas only.

If you present it in person you’ll also have the ability to discuss in advance more sensitive issues that were too detailed to be included in the letter. Those issues may include:

Consider adding an Issue Resolution Agreement to the back side of that “commitment letter”. The idea here is to explicitly show the customer how they should behave when they have an issue with your service.

I’ve mocked up an Issue Resolution Agreement (click here, or the thumbnail, for a PDF). Feel free to recreate your own version, changing whatever you see fit. Its purpose is to get your new customer to redefine their customer-supplier mental model. Hopefully, this spells out how issue resolution should / could work. 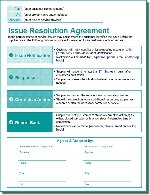 Whatever you may use, it’s important your customer signs off on their understanding and acceptance. Signing anything makes it feel like a legal commitment. Although that’s not the intent here, that’s not a bad obligation for customers to feel they’re under.

As with your “commitment letter”, presenting and discussing your Issue Resolution Agreement in person is essential. When you both sign in the presence of each other you’re setting the stage for dealing with the real world in the future.

True Up Your Understanding to Reality

The point is, once we adjust our thinking and expectations we can do what’s needed, rather than fight against the way our mothers told us it would be.

When the Bus Arrives

As much as we’d like to avoid customers trashing us to save their skins, it’s still going to happen. When it does, consider the following:

Act at the moment customer behavior goes seriously sideways. Bring it up, there and then. Respond immediately and appropriately.

Like house training a puppy, customers will more fully see where they’ve gone astray if suppliers bring it up at the time it happens – rather than later when the context is no longer fresh in their minds (think puppy, carpet, newspaper…you get the picture).

Show the customer how responsible business partners work with each other.

* Tell it like it is –> but always with the recognition that it’s the way you see it. They obviously see it another way, and you can’t tell them they’re wrong, just that you have a different perspective. Who knows, your eloquence may help them see it in a new way.

* Once you say you’re going to do something, do it –> You probably already do. Doesn’t hurt to remind customers that you’re living up to your promises. Lay it out there so they can ponder whether they’re living up to theirs too.

* Seek win-win solutions –> It helps presenting their benefits first, then yours. But when describing how you win, indicate how your success enables on-going and continued successes for them.

In the final analysis, not all customers will come around despite your best efforts. So, if you’ve exhausted all avenues and have to come to grips with the fallout of firing that customer, go ahead and do it. Cut ’em loose, graciously and without apportioning blame. Remember, sometime in the future that same contact may be with another company and have the opportunity of hiring you – so don’t torch the relationship. Just let them know you weren’t a good fit.